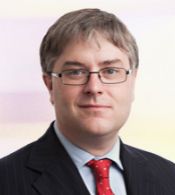 Ben Williams of 4 New Square, described in Chambers & Partners as a ‘an absolute genius in terms of his eloquence and ability to react to issues when in court’.

Ben has been described as a ‘quick-witted, brave and eloquent advocate who continually impresses with his general brilliance’; as ‘mesmerising’ in court where his ‘arguments are very difficult to defeat’; and as someone who ‘can take on anything and do it to a high standard’.

He is an expert on all aspects of the law relating to solicitors, including costs and litigation funding, professional negligence, and SRA and other regulatory and disciplinary work. He is an editor of Cordery on Legal Services (formerly Cordery on Solicitors), and is recommended as the leading junior on costs by both Chambers & Partners and the Legal 500, having appeared in nearly all of the major costs cases of the last decade.

Acknowledged also as an expert on civil procedure and consumer law (including consumer credit), he is an editor of the White Book 2013 and recommended for consumer law disputes by Chambers & Partners.

His insurance work has included the litigation arising from collapsed claims management schemes (such as TAG and Imperial Consolidated), as well as the long-running ‘credit hire’ litigation, where he has acted in many of the leading cases in the Commercial Court and Court of Appeal.  He advises on, and drafts, policy wordings, binders, agency appointments and similar.  In addition to his experience in the main categories of liability insurance, his expertise in litigation funding disputes has given him particular knowledge of the legal expenses insurance market, and the emerging alternative products for funding dispute resolution.

Ben was recently involved in the Sonae Group Litigation, the largest ever UK group claim for compensation. The case involved costs claims in the region of £60 million.

Ben is a member of COMBAR and of the London Common Law & Commercial Bar Association.